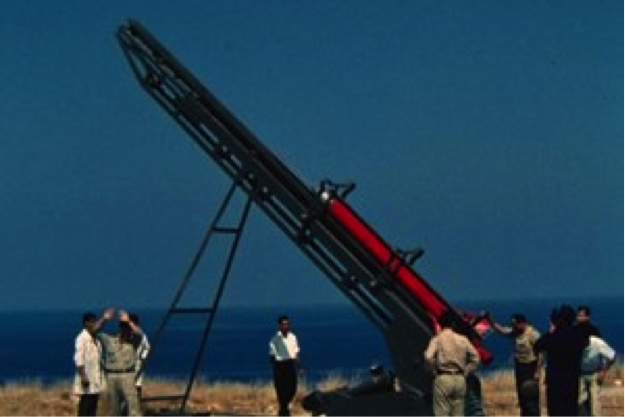 At the same time the US and the USSR were trying to send a man to the moon, this tiny Arab country was sending ‘Cedars' - entirely locally manufactured rockets - 200km into space. The mastermind behind this initially humble, then phenomenally successful undertaking was Professor Manoug Manougian, a young, idealistic mathematics and physics lecturer at Haigazian College (now University) in Beirut. His formidable crew consisted of six committed and ingenious college students.  After stumbling across this incredible, forgotten story in 2001, local filmmakers and artists Joana Hadjithomas and Khalil Joreige spent years conducting research and puzzling over it. Awarded Best Feature Documentary at the 2012 Doha Tribeca Film Festival, The Lebanese Rocket Society will be released in Lebanon this week.

The film interweaves archival footage and images with interviews with some of the protagonists, as well as a stunning animation by Ghassan Halwani at the end of the film, which challenges audiences to dare to dream big. The superb original score is the work of Nadim Mishlawi, Scrambled Eggs and Discipline.

As a young boy, Manougian was captivated by the idea of space travel. He founded the Haigazian College Rocket Society in November 1960 to teach science and mathematics and to harness the excitement around space exploration - the Soviets had successfully launched Sputnik 1 in 1957.

The six charter members were Simon Aprahamian, Garabed Basmadjian, Hampar Karagosian, Hrair Kelechian, Michael Ladah, and John Tilkian. The first task was to prepare single and multistage solid fuel rockets. "My students were in their early stages of college education," Manougian remembers. "They learned the methods of scientific exploration, dealt with failures, and experienced the thrills of success."

One member, Aprahamian explains: "I was responsible for the rocket fuels. We experimented with different [solid] fuels to see which would work best. We all helped out in the launching of the rockets and learned the value of teamwork. We all worked hard and spent at least twenty hours a week on this project."

"The club started strictly as a science project and had no motives other than applying and testing scientific principles," says Ladah, another original member of the club.

Wonderful footage shot at the time, which Manougian and photographer Edouard Tamerian have kept safe, features prominently in the documentary. It shows the spirited and enterprising men outside Beirut, working together to launch the prototypes of what then became a series of Cedar Rockets. What initially looked like flimsy projectiles eventually progressed to seven-meter long rockets weighing over a ton and capable of reaching further and further.

"The excitement at Haigazian College was such that even students who were not members of the Society devoted time to mix propellants or do other odd jobs. Undoubtedly, the project inspired many in and beyond Haigazian," Manougian recalls.

Within a short time, the rocket society achieved formidable results along with the attention (and eventually involvement) of the government and army. "The Lebanese Army was not involved during the first two years," Manougian explains. "However, in view of the capabilities of the rockets we were launching, and the errant trajectory of one of the rockets, the Government of Lebanon decided to specify a safe and controlled launching site. Soon thereafter I met General Joseph Wehbe and invited him to participate in our experiments, and asked for the use of the Army workshop for the construction of the rockets. He agreed to both. From that point on we worked together on specifications, propellants, and the construction of rockets."

"I believe that the [Lebanese] Army had different objectives and motives than ours and that is why it took over the project and sponsored it in the following years after I left the society [in 1962]," Aprahamian expands.

"It was not until late 1965 that the interest of the Lebanese Army in rocketry as a weapon became apparent to me," Manougian reveals. "After the successful launching of a powerful one-stage rocket, Cedar 6, and the failure of Cedar 7, we launched a highly successful two-stage rocket with a range of 90 miles. At that point I ended Haigazian's involvement in the project."

The successful launch of Cedar 8, on 4 August 1967, marks the end of Lebanon's space odyssey, which quickly was forgotten.

"How is it that it was forgotten? This positive scientific project..." Hadjithomas probes. "Why is it so absent from our individual and collective memory?" She underlines that she and Joreige don't work on collective dreams. "The individual [dream] entails a dream in which you can live with others. The collective dream is pitted against others."

"There was this idea of wanting to change things (in the 60s)," Joreige explains. "Today a dream can be conceived outside reality, for us it's maybe the will of changing reality. It certainly is the opposite of being cynical. It entails not accepting the world as it is."

For Manougian, the Lebanese Rocket Society was an exciting voyage of discovery; "a voyage in which my dreams were realized against all odds. It taught me perseverance. As a teacher, using the methods of mathematics, the sciences, and engineering, the project gave me a vehicle by which the process of innovations and inventions were taught."

Aprahamian underlines that labels did not matter at that time even though most of the members were Armenians from Palestine. "The purpose was more scientific collaboration and pride of achievement no matter what nationality you were."

Manougian readily admits that the Lebanese Rocket Society and space explorations are still in his blood. "The project was a challenge and a passion. I satisfied both and face new challenges. [Am I] nostalgic? Often."

"On my office walls are frames showing newspaper articles and pictures about the experiments we performed in Beirut. Two years ago a group of engineering and science students at the University of South Florida came to me asking if I would agree to serve as faculty advisor for their club, the Society for Aeronautics and Rocketry (SOAR). I asked what it is they wanted to do. Their response was: ‘We want to launch rockets,' to which I answered: my students in Lebanon, some 50 years ago, did that reaching the thermosphere. Can you improve on that? Then, I offered them a challenge. I would work with them only if they would come up with a rocket that does not require chemicals as a propellant. They are hard at work!"

"We speak so much of memory because there is so little of it left," writes French historian Pierre Nora. Hadjithomas and Joreige's film, primarily focusing on a stupendous chapter of Lebanese history, gives the exploits of a few young, idealistic, and ingenious individuals the recognition they deserve - and invites us to (re)consider to dream.

"Something happened in France; a group of 200 history teachers saw the film and they will integrate the film in their classes," Joreige recounts. Undoubtedly, this film ought be screened in schools to inspire some young Manougs and Manougettes to reach for the stars and maybe one day we'll be saying ‘Beirut, we have a problem...'"