Home News Rockets of Lebanon's past

Rockets of Lebanon's past 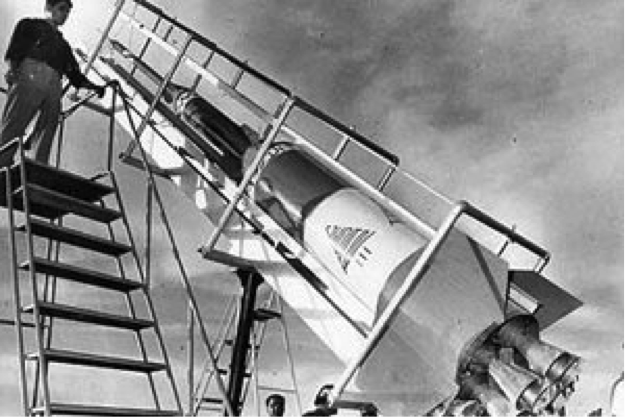 As you drive down the main road that leads to Hamra, a district of West Beirut, you will notice, if you're observant enough, beyond the shrub covered walls of the Armenian institute, Haigazian University, that a white needle nosed rocket points towards the sky, or the stars, dependant on how romantic you wish to be.

I first noticed this white needle nosed object when I took my inaugural wanderings around the city. I was, however, one of those people that saw the rocket and apart from an initial interest as to what it was for, left it at that. It was only about one year later that I came across 'The Lebanese Rocket Society.' A local department store magazine had printed an article about a coming exhibition by the wife and husband team Joana Hadjithomas and Khalil Joreige at the Beirut Exhibition Center. The focus of their work was the dream of scientists to enter Lebanon, this very small country on the world stage, into the international space race.

For those who are expecting a straight documentary, this ain't no 'Searching for Sugar Man'. On the whole, the film offers up most of the essential details of a surprising moment in Lebanon's past - certainly not ones you're going to find in a history book. Considering how this whole episode of the country's tiny part in the space race wasn't common knowledge among its citizens after the late '60s, Hadjithomas and Joreige managed to find film footage as well as various photos and in their film conducted interviews with key members of the original group.

While major players on the world stage were gathering and funding scientists to build equipment for space exploration, the Lebanese left it to the eager minds and hands of students and faculty at the Haigazian University. Led by the young mathematics professor, Manoug Manougian, their tale is remarkable. They didn't even have propellants; they had to work out what chemicals they could mix together, themselves, by hand, in order to get those babies off the ground. They started very small, with something the height of a chair, and eventually worked their way up to a rocket over three metres long that could travel as far as Cyprus.

As the rockets grew in size so did the suspicions that the motives behind making them were not purely astrological. Wehbe, who was brought in to work with the scientists pretty much from the start, freely admits in the film that the army were starting to see how it could be used as a weapon and not just a cloud grazer. Then suddenly in 1967 the work stopped. Halas. No more. And no one knows why, apparently. Manougian does give 'second hand' information that it was the French government that told the then President Fouad Chehab to call it a day, and not let the group continue their work. And this is where I was rather let down by the film; there seemed to be no further investigation as to a motive for bringing the rocketry to such an abrupt end - another piece of Lebanese history left for the rest of us to speculate upon.