A New Year’s Day in the life of Beirut 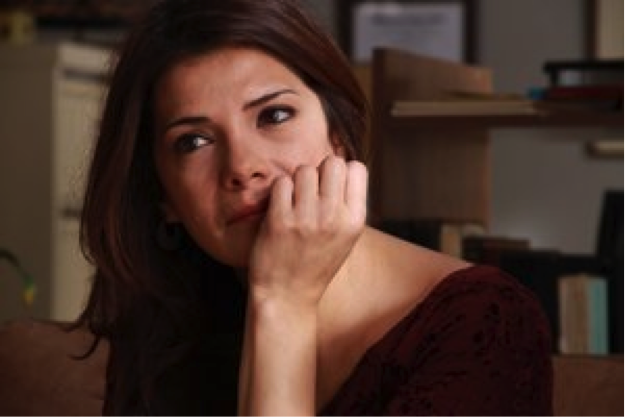 A psychiatrist named Ghassan (Camille Salameh) has set up his practice in an anonymous tower block somewhere in the Lebanese capital. His list of clients is varied and on this particular day he has appointments with wide sample of Beirut fauna. An attractive young bourgeoise named Yara (Nada Abou Farhat) comes in to discuss her relationship with her husband.

"I have two men but I feel empty," she says. "Is there anything wrong with that? Maybe I need a third?"

He asks Yara what she wants from her relationship.

"I want love," she smiles. "I want passion. I want money. Sex. Maybe what I'm really missing is someone to listen to me, like you."

"You're still avoiding my questions," he retorts.

"I feel okay," she avers, smiling again. "I feel well enough to come see you."

As the session winds down, she confides that she and her husband will attend a party that evening and that she's invited her lover Hussein to come as well.

It is New Year's Eve in Beirut.

A little later an anti-social fellow named Wajdi (Hassan Mrad) visits Dr Ghassan. By all evidence an irredeemable nutcase, Wajdi trashes his doctor's office, then explains that all he does is work. His job is repairing busted mannequins.

Ghassan observes that if you spend all your time with human facsimiles, you're bound to be lonely.

"You shouldn't isolate yourself," he continues.

He does too, sort of.

Somewhat later, Ghassan sits patiently waiting for a jittery, pill-popping Ziad (Ziad Antar) to discuss his relationship with his girlfriend Katia. He replies that he broke up with Katia while inviting her to a New Year's Eve party this evening, then launches into an energetic series of questions about the hip new medications European pharmaceuticals manufacturers are dropping on the market nowadays.

"I have profound physical responses to women," Ziad declares, then asks, "Is there a medication for feelings?"

"No," Ziad shakes his head. "It's just the anti-anxiety medication clashing with the stimulants!"

"Ziad you're running away," he rejoins. "Has it occurred to you that all the women you fantasize about are married?"

"Every time you tell me something, I think about it all night," Ziad replies, fidgeting. "It gives me a headache, so I take some pills so I can get some sleep."

These vignettes are among the several one-on-one encounters that comprise "Stable Unstable," the feature film debut of Lebanese writer-director Mahmoud Hojeij. The film had its world premiere at the Dubai film festival this past December and will have its Beirut release later this week.

The last weeks have been harvest time for Hojeij's fertile imagination. Though he's been making shorts and docs for nearly 15 years, he has more recently moved into the visual arts.

"Relatively Speaking," his second solo exhibition at Beirut's Agial Gallery, has been extended to the end of January, giving viewers a unique opportunity to glimpse two quite different facets of his practice.

A sardonic reflection upon the Middle East's place in the contemporary geopolitical order, "Relatively Speaking" is a multimedia show deploying a wide range of found and fabricated images and forms - watercolors, maps and map-inspired board games, ironically inflected electricity meters and mold-like absences made to the dimensions of such objects as a Kalashnikov bullet, a Schengen visa, a Lebanese ikhrajaat identification document and, naturally, a U.S. dollar note.

"Stable Unstable" works with a time-tested narrative device - an ensemble cast enclosed within a single building - to erect an elaborate metaphor (synecdoche, if you like, or mise en abyme) for a somewhat wider space: Beirut.

Like his visual art, however, Hojeij's film is loaded with a species of self-conscious irony, making it appear to be something it isn't.

The one element holding the film's ensemble of stories together is each character's affection for the thing that makes him or her unstable. All Ghassan's patients are self-aware enough to know that there's something missing from their lives. All seem to enjoy performing their dysfunction for him - sometimes trying to implicate him in it. Yet none appears the least interested in taking his advice on how to stabilize their lives. All are too busy performing to listen to reason.

Staunch Enlightenment devotees may find it disturbing to see Hojeij's characters thumb their collective noses at the normative premises of clinical psychology. Formally speaking, though, Hojeij's successful execution of the film's narrative structure - erecting the "New Year's Eve" premise as a straw man that his characters can knock down - is the film's main strength.

Hojeij's film is an ode to Beirut composed in Beiruti dialect. "Stable Unstable" doesn't dwell upon parochial political or cultural references that non-Lebanese can't grasp. Yet the film may have difficulty translating to anyone who's never lived in Beirut.

At any rate international critics attending the film's Dubai premiere expressed bafflement at the hilarity it provoked in certain quarters of the audience.

Non-Lebanese audiences may also find something a trifle self-serving in the character of Ammar (Husam Chadat), a Syrian national who gets therapy in Beirut.

A victim of Syria's mukhabaraat (secret police) culture, Ammar says he can't confide his feelings to a therapist at home because it will surely be used against him. En route to a discussion of how he wishes he had been able to express himself to his father, Ammar must confess to being "excited" by the Lebanese accent.

" Beirut is a liberal city," he says. "Sex is easy. Over there, freedom of speech is forbidden."

"Stable Unstable" does have several things to recommend it, not least several of the performances of the ensemble cast. The great strength, however, is the writing.

Early on, Abou Karim (an excellent Fadi Abi Samra) the building's natour (concierge) seeks Ghassan's advice - asking what he should do with his son, Karim, during the New Year's revels. Over the course of the film, however, Abou Karim's role becomes more substantial, a comic foil for that of the psychologist.

He greets the patients as they enter the building, chats with them in the lift and generally provides an amusing counterpoint to the doctor's cautious efforts to bestow advice - asking Ziad to provide him with some pills for his pal's New Year's celebrations, for instance.

Though many of the film's exchanges take place in Ghassan's office, his building's lift operates as a vital interstitial zone. Here characters (alone or in pairs) are granted a mirrored solitude, where they can gaze at themselves without the distraction of an audience (their psychologist, for instance) and speak to themselves honestly - or with frank delusion.

An elevator is also an ideal space to practice the torch song you plan to belt out to your gal over the intercom - because her conservative parents are afraid to let her see boys.

"Shu?" Abou Karim interjects when the lift's doors open upon a young man's performance. "You think I built a stage for you here?"

The young fellow makes his excuses and exits the elevator. The natour fixes his hair in the camera lens (which stands in for the mirror) and belts out a verse of the song himself.