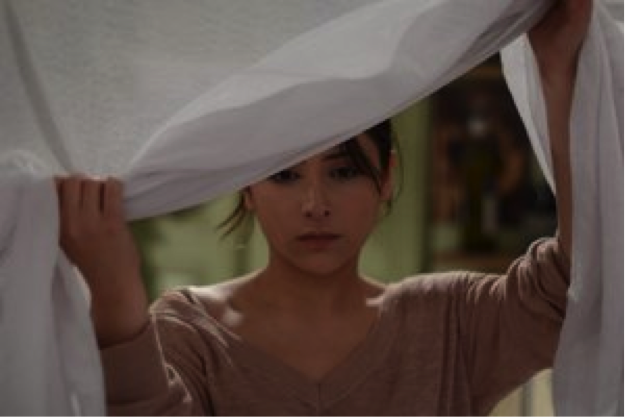 Acclaimed Syrian director Mohamad Malas speaks from the heart in the language of poetry. Filmed in the midst of armed conflict with bombs exploding near the set, Ladder to Damascus partakes of the tragic ongoing reality of Syria today. Like the Egyptian Rags and Tatters, which also made its bow in Toronto, its fictional story can't avoid being influenced by events happening around it. But Mohamad Malas, Syria's dean of filmmakers, is a poet not a documentarian, and the film is a cry of anguish told through expressive filmmaking. Containing no up-close views of fighting in the streets or explicit references to the warring factions, its audience is likely to be limited. Another factor that cuts into its appeal for Western viewers, but which should be a plus for Arab speakers, is the frequent referencing of Arab writers and thinkers. The subtitles sometimes read like a street sign with a hasty description of the person cited. Even its mention of a religious group called the Alawites or a Suwayda accent, or its salute to the outspoken dissident documaker Omar Amiralay, who died in 2011, will probably come as news to most viewers outside the region. There are enough of these references to be daunting. This is obviously a work made from the heart by a masterful director with no thought to compromise for his international audience. The film's style itself belongs to the kind of elaborate filmic calligraphy that is usually found in experimental art films. The extraordinarily crisp images bathed in light by masterful cinematographer Joude Gorani turn into multiple layers of imagery, highly suggestive of the depth of issues being touched on. A huge projection of a strip of 35mm film instantly creates an association with the ladder in the title, and the idea that through cinema one can reach truth and freedom. These are big ideas and risk feeling like abstractions to the casual viewer, who is left trying to decipher oblique statements like, "I live in a country that gives me no refuge." Naturalism and realism are the farthest things from the filmmaker's strategy. The opening scene, which introduces the two young protags, Fouad (Bilal Martini) and Ghalia (Najla El Wa'za), is set on a small college stage where aspiring actress Ghalia recites a monologue while aspiring filmmaker Fouad tapes her. As she strips out of a floor-length white burqua to street clothes, she talks about feeling that another woman lives inside her: Zeina, a girl from her town who committed suicide when her father was arrested. "When the uprising began, I felt Zeina return," she says, and spends a great deal of time talking to her smiling, silent doppelganger, played by Gianna Aanid. The sense of theatricality continues in the old multi-storied house in Damascus where Ghalia goes to live on Fouad's suggestion. It is basically a rooming house for students run by a nice old lady (Rana Malas). It's interesting to see the Syrian boys and girls from different ethnic backgrounds, including Christian, living together and developing romantic entanglements. But between their Apples and cellphones, tenderness and love affairs, the war is more than a shadow over their lives. In the courtyard, Fouad projects his anguishing interview with a man who has spent 17 years in prison, while helicopters and planes cross over the open courtyard and are reflected in the troubled waters of a fountain. This complex shot is typical of the symbolic level of cinematic language Malas uses to describe the inner turmoil of his characters. And even if the layers of gauze and window panes and mirrors can seem cloyingly Baroque at times, the esthetics are always metaphoric and never as an end in themselves. It's more difficult to adapt to the theatrical acting style imposed on the cast. As Ghalia comments, she doesn't know if she's awake or asleep. El Wa'za's passionate performance is remarkable in such a young actor, but it is kept on a highly abstract plane that doesn't brush reality as most films conceive it. Though politics are, out of necessity, approached obliquely, the film's position is probably represented by Ghalia's father, an ex-army officer stripped of his rank when his son was arrested. Of his former hero President Hafez Al-Assad he says, "You have booby-trapped the country and turned every protest into conflict." Besides the superb cinematography, music by composers Charbel Haber and Toufic Farroukh make a major but never obtrusive contribution to the atmosphere.