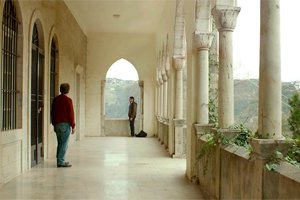 CANNES 2016: Vatche Boulghourjian shoots to fame with a clever and engaging first feature about a man searching for his identity amidst the web of lies Lebanon wove about his past.

"These men have no conscience. They do as they please and then hide themselves away." With Tramontane [+], a classic tale of innumerable lies and an elusive truth, embellished with particularly ingenious and efficient new twists, Lebanese director Vatche Boulghourjian has managed to take a distinguished first step into the feature-film universe, competing in the Critics' Week at the 69th Cannes Film Festival.

Trained at the New York University and already recognised on the Croisette, having won third prize in Cinéfondation's film-school competition in 2010 with his short Fifth Column, the director proves to be an impressive scriptwriter, using successive layers to mould the mystery at the heart of his subject matter: the very personal quest of a protagonist who is doubly blind - physically since his tender youth and psychologically when he discovers by chance that his ID card is fake and has no ties whatsoever to any legal records. This sudden jolt throws him headlong into an existential search clouded by a web of secrets and fabricated realities, mirroring a country, Lebanon, where civil war (1975-1990) has left deep scars that have been carefully covered up.

In addition to making an individual's life resonate on the same frequency as the fragmented history of a nation, another of Boulghourjian's notable successes is in making his lead character, Rabih (Barakat Jabbour), a young musician and singer. This provides Tramontane with some beautiful musical interludes embedded with subliminal messages ("An answer, even if you want to blame me, send me an answer"; "They left and never came back, leaving my heart in pieces"). In fact, it is actually one of Rabih's songs, as he is surrounded by his mother Samar (Julia Kassar) and his uncle Hisham (Michel Adabashi), that opens the film. Upon applying for a passport in order to go on tour with his musical ensemble abroad, Rabih quickly discovers that his papers are fake and that he is in danger of being arrested (a red herring that the director uses very subtly at the start so as to create an atmosphere of uncertainty regarding the true motives of the characters).

A first lie from his mother quickly follows: that his birth certificate must have been lost during the war, but when the hospital has no trace of it in their records and requests a blood test, she confesses to him that he was found by his uncle as a baby, during a patrol through a village in the South that was destroyed during the war. However, Rabih's subsequent trip to his supposed hometown only serves to thicken the plot, as the site has never come into contact with any form of conflict, and no child has ever been reported missing. Confusion, anger and discord flood into the blind man's life ("Everything around me is false") and, driven into a corner (his mother is not his mother, and he doesn't know who he is - "If you don't know your own name, how can you know who you are?"), he stubbornly sets out to pursue an investigation into his past, which soon leads him to take an interest in the old brothers in arms who served with his uncle, who has mysteriously disappeared. A descent into the hazy past of a country that holds plenty more lies and surprises in store, where truth and falsification blur together, and where "the sole witness to events is the earth beneath one's feet".

Produced by Lebanon, Tramontane was co-produced by French company Le Bureau - Le Petit Bureau (which is also handling international sales) and by Qatar and the United Arab Emirates, with support from the Venice Biennale College Cinema, the Sundance Institute, Arte, the CNC's World Cinema Support, and the Berlinale World Cinema Fund. Distribution in France will be managed by Ad Vitam and international sales by The Bureau Sales.