Home News The Valley at the MoMA

The Valley at the MoMA 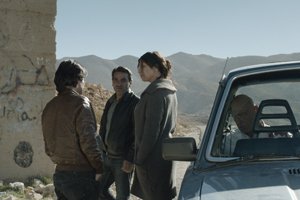 The Valley by Ghassan Salhab will have its New York premiere at the MoMa part of the AFAC Cultural Week.

The screenings will take place on:

After a series of roadside accidents, an amnesiac man is reluctantly taken in by a secretive group living in the Bekaa Valley, on Lebanon's border with Syria. The group members, who are revealed to be producing drugs in the compound, are suspicious of this man without a past-though they themselves have left a life behind to be there. The rising tension is heightened by the camera, which frames figures against interiors until the house seems to close in on them, and the painterly vistas of the valley beyond their windows appear a world away. Radio news coverage of crises across the region (which punctuates the eerie score by Sharif Sehnaoui and Cynthia Zaven) only confirms what the inhabitants already know: danger is all around. In Lebanese auteur Ghassan Salhab's poetic meditation on his war-ravaged homeland, the national zeitgeist is reflected in the protagonist's amnesic blankness. This hauntingly beautiful film is ultimately a ghost story about a nation's painful history and uncertain future.