The sound of Beirut’s carnage portrayed in The Valley 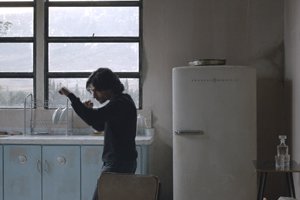 We think of film as a visual medium, but a blind man could follow The Valley.

In the third act, a formation of F16s buzz over the Lebanese countryside. But the sound they make is much more unsettling than most movie warplanes. It is a sound that reaches inside and jangles your central nervous system.

"It's a sound like ..." - the director Ghassan Salhab makes a ripping motion, then pulls out his phone and consults his French/English dictionary - "... tear. It tears up your ear."

Sound, too, opens the feature, which had its world premiere at the Toronto International Film Festival (TIFF) and is scheduled to compete for the US$100,000 (Dh367,000) Black Pearl Award in the narrative category at the Abu Dhabi Film Festival (ADFF) in October. A car speeds up, then crashes into the hillside. Only we do not see any of it. It is just audio over a black screen.

"It's important for me that the viewer gets grabbed, first by the sound," Salhab says. "It is to prepare him for what will come. Put him in this kind of mood.

"I'm not interested in the challenge of how can I make a car crash. So many films have car crashes and, let's be honest, I work with a small budget, so I put all I have into the right places. It's also not the right place to show it. Cinema is not a toy, it's something else for me."

Salhab looks the part of the serious auteur. He wears the same blue polo shirt, jeans and running shoes he wore the evening before to the premiere. The 56-year-old has thinning, black, mad-scientist hair and is unshaven. He is described as "a solitary character hovering right above a Lebanese scene that some claim is in turmoil" whose "acute awareness of the tragic, sometimes pathetic dimension of historical existence ... affords his work a certain form of empathetic distance". And that is from his press kit.

The Valley concerns the survivor of the car crash (Carlos Chahine) who, bloodied and dazed, happens across two men who are trying to fix their car. The stranger discovers he cannot remember anything about his life, though he is able to restart their car. The men consult with two female colleagues and reluctantly agree to take the stranger with them. We discover soon enough why they are reluctant: one of the barns on their vast acreage is a drug lab that would make Breaking Bad's Walter White jealous.

But plot is not really the point of Salhab's films. "I am not a storyteller," he admits. "I know I'm not making a mainstream film, but even if it is not mainstream, you are having a dialogue with the viewer and their expectations."

After nine years of experiments in short film, the director completed his first feature, Phantom Beirut, in 1998. Four years later, his follow-up, Terra Incognita, was selected to play at Cannes in the Un Certain Regard programme.

Last Man (2006) played at the Dubai International Film Festival and his documentary 1958 (2009) was screened at ADFF (the festival helped fund The Valley through its Sanad programme).

Those four films were all set in Beirut, his home, but he turned his attention to rural Lebanon in The Mountain (which played at TIFF in 2011).

The Valley, the middle film of what Salhab calls his rural triptych, will be followed by The River.

"As a filmmaker, you have to tell a story," he says. "You have to go to the places where those stories take place, and I have become incapable of seeing Beirut. It was overwhelming me and I had to get out."

But Beirut still looms large in Salhab's mind. The entrance of the F16s is testimony to a life in the capital. Salhab, you see, witnessed a bombing. He was standing on a rooftop in 1982 when an Israeli jet flew by and let loose its payload. But the building he was on was far away from the scene and so, rather than scarring him, it inspired him. "It was like a film," he says. "Spectacular."

In The Valley, he wanted to avoid this Hollywood version of war. And so he and his sound designer Lama Sawaya went about creating the sound of the end of Beirut.

"If I may say, I have a good ear," he says. "I wanted the viewer to be almost attacked if you might say. Literally. I don't want the comfort of my own experience."