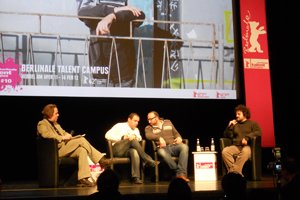 The Beirut-based Ashkal Alwan collective has been committed to the production, facilitation and circulation of a wide range of artistic practices since 1994. Several directors linked to Ashkal Alwan are presenting their latest work this year at the Berlinale, and they join the Talent Campus to discuss their ground-breaking work, explain their many projects including the creation of an archive and an interdisciplinary education program which cultivates a new generation of artists and filmmakers after the Lebanese civil war.

The panel was moderated by Marcel Schwierin with the participation of Mahmoud Hojeij, Ahmad Ghossein and Gheith Al-Amine.