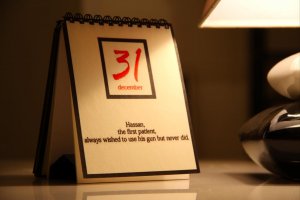 Happy New Year everyone! We hope that 2012 will be a great year for Lebanese Cinema.

Abbout Productions is proud to announce that shooting on their latest feature film Stable Unstable will start this January.

Stable Unstable is set in an apartment building in Beirut, on the last day of the year.
Seven characters start their day by visiting their psychologist as part of the weekly ritual. On that couch in their psychologist's office, they face themselves and their loved ones in trying to define what is most important to them. Each of them, from the patients to the residents of the building, has a different story to share, inner secrets and hidden wishes. All keep to themselves, except for the porter Abou Karim, who extends his presence and allows himself to interfere in the lives of others and in their destinies.

Stable Unstable will shoot throughout the month of January and will be released in theatres at the end of 2012.