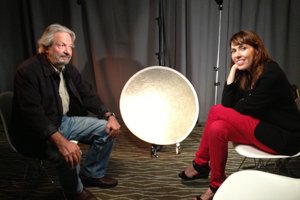 The characters in Ladder to Damascus have dreams of being actors and filmmakers.

They fall in love. They disagree with their parents but love them nonetheless.

They dream big. They argue with their significant others.

Except they happen to be in the midst of the bloody insurgency in Syria.

In his gauzy dream of a film that occasionally veers into a nightmare, Syrian director Mohamad Malas shows us the reality of war and the irrepressible nature of the human spirit, no matter how grim the circumstances.

It's a reality Malas knows all too well. Syria's pre-eminent auteur director, he's been putting his life in danger for decades, directing documentaries and feature films that are often quite critical of the regime.

Ladder to Damascus mixes documentary and feature-film-making styles. The actors in it, young Syrians moving to Damascus to pursue their professional dreams, tell stories that partially reflect what happened to them in real life: arrests, families being torn apart, and constant fear for the safety of their loved ones.

In addition, the situation in the country while Malas was filming (in 2011) forced the cast and crew to resort to using some creative techniques. Malas would shoot a portion of the film, stop when the fighting got too close to the set or if the authorities got suspicious, then resume as soon as he could. At one point, a bomb exploded right next to the house they were filming in. At another, the film's sound engineer was kidnapped by the authorities for political reasons and detained for 40 days.

As a result, Malas produced a unique piece of "art imitating life." He adjusted the script on the fly to reflect the changing circumstances of the people involved in the film.