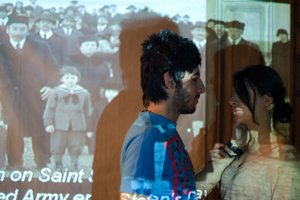 As two dramas about the conflict vie for attention at TIFF, normally outspoken actors and ﬁlmmakers on hand for the fest remain conspicuously mum on the subject.

The conflict in Syria and the increasing likelihood of Western involvement is occupying hearts and minds at this year's festival. Still, when it comes to Hollywood voices publicly weighing in on the debate over U.S. intervention in the territory, the silence has been deafening.

A number of high-profile Hollywood names on hand for the festival, who've been outspoken in the past on U.S. military intervention, have been uncharacteristically quiet on the issue. THR reached out to more than a dozen, including Susan Sarandon, Penn Jillette, Josh Brolin and Tim Robbins, all of whom were unavailable for comment. One TIFF attendee contacted by THR was ready to comment until being cautioned against it by his film's distributor.

Not everyone is mum on the subject, however. Syrian auteur Mohamad Malas, whose Ladder to Damascus had its world premiere at TIFF on Sunday, tells THR he feels it's up to the Syrian people alone to decide the fate of the country, stressing that his movie does not address such issues. "I'm against intervention in the situation, but I am for intervention by the Syrian people, who are the only ones to have the right to change the situation," says Malas. He adds that when it comes to Hollywood's take on the subject, "all opinions are welcome" but underlines that the questions over Syria are incredibly thorny.

Italian distributor and producer Francesco Melzi d'Eril, who has Syrian film Border playing at the festival, says he understands Hollywood's reticence to weigh in. "Hollywood is America and America has a big involvement in Syria, but there are no troops on the ground yet, so it's too early," he says. "They react fast but not that fast." Perhaps Border, directed by Alessio Cremonini, and Malas' Ladder will stir opinions at the festival.

Border is the story of two sisters who, after learning that a member of their family has decided to desert the Syrian Army and join the opposition Free Syrian Army, are forced to embark on a hazardous journey to Turkey. Malas' film concerns 12 young Syrians who find themselves confined to an old house in Damascus as the uprising erupts around them.

Malas shot his $800,000 project in Damascus in wildly dangerous circumstances, just months after the outbreak of the 2011 insurgency, under a shroud of secrecy and at great risk to his crew. The production had to be halted twice. First, when a bomb exploded in the house next door to the shoot and again when security services kidnapped the movie's sound engineer for political reasons, according to Malas. The sound engineer was not released until 40 days later, so Malas was forced to replace him to finish the shoot.

Malas still fears for his cast and crew, who remain in Syria. Cremonini deemed shooting his movie in Syria to be "out of the question." When his co-writer Susan Dabbous - a journalist who had been kidnapped for 20 days in the territory - returned to Europe and said rural Syria looked like Italy, he opted to shoot Border 40 miles outside of Rome and cast Syrians who live in Italy.

Both films are hoping to find international audiences at TIFF. Melzi d'Eril tells THR that part of the motivation to make the film came from a desire to bring Syria and its people to the big screen. Melzi d'Eril is doing his best, along with sales banner Rai Trade, to kickstart distribution conversations in Toronto. And Malas has been fielding meetings with sales agents here.
But despite some positive noises from U.S. buyers, the films appear too hot to handle right now. And for some high-profile TIFF attendees, the topic remains equally challenging. When asked about the Syria situation Sunday, one well-known auteur on hand to preview footage of his upcoming release demurred, adding that he "didn't notice" Hollywood's conspicuous silence on the subject.