Ladder To Damascus at the Toronto International Film Festival 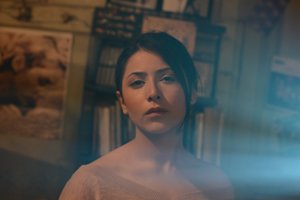 Ladder To Damascus by Mohamad Malas will have its world premiere at the 2013 Toronto International Film Festival in the Contemporary World Cinema category.

Mohamad Malas, recognized widely as Syrian cinema’s first auteur, resurrects the ghosts of his country’s thirty-year-old dictatorship with this searing drama, shot in Damascus under a shroud of secrecy and at great risk after the outbreak of the 2011 insurgency.

Shot in Damascus months after the outbreak of the 2011 insurgency, under a shroud of secrecy and at great risk to the crew, Ladder to Damascus is a searing drama that weaves fiction and documentary with elements of the fantastical. In a century-old home in the centre of the city, twelve young Syrians from across the country rent rooms, having moved to the capital in pursuit of studies or professional ambition after the insurgency broke out in the countryside. Huddled within the confines of the elegant house as the uprising gradually erupts in the city, they can no longer ignore the calls for freedom. Conceived as a huis clos, Ladder to Damascus is a captivating window into the psyche of ordinary Syrians grappling with a historic upheaval.

A veteran of Syrian cinema and one of the most accomplished Arab graduates of Moscow's VGIK film school, Mohamad Malas resurrects the ghosts of the chilling legacy of his country's thirty-year-old dictatorship as vividly as the clamouring in the streets. Gorgeously filmed by Joude Gorani and magnificently edited by Ayhan Ergursel, the film confronts the question of cinema's role in times of turmoil, employing its own unique visual language. It also draws, sparingly, on allegory — in image and dialogue — to lattice the complex existential questions that hound both its characters and its author.

Beginning with an homage to the late Omar Amiralay, a fearless Syrian dissident and documentary filmmaker, Ladder to Damascus concludes that emancipation can only spring from love, and revolution from desire. A majestic feat.