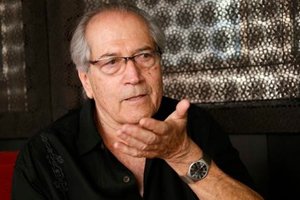 As the United States and the Soviet Union sprinted to the moon during the Cold War, a young Beirut professor challenged his students to put Lebanon's own footprint on the global race to space.

Then 23 and teaching mathematics and physics at Haigazian University, Manoug Manougian turned a small science club into a national rocket program endorsed by the Lebanese Army and then-President Fouad Chehab.

For Manougian, who visited Lebanon this week for the first time in nearly half a century, the original challenge was to teach his students the basic principles of physics and math through real-life experimentation.

"I simply told the president of the university that we want to build rockets because I want to teach the students the laws of physics," Manougian said, recollecting his first years at Haigazian University in the early 1960s.

"What better way to teach students the principles of physics than actually doing something that requires physics and mathematics?"

Manougian told The Daily Star about his aspirations as a student at St. George's High School in Jerusalem, his studies at the University of Texas, and how he came to found the Lebanese Rocket Society.

A film about the society, by Joana Hadjithomas and Khalil Joreige, is now screening at Metropolis Cinemas Sofil and Dunes theaters.

Although Manougian's rocket project made the front pages of newspapers and magazines in the 1960s, it was forgotten for decades due to the Civil War that raged in the country.

But between 1960 and 1966, Manougian led a team of students that successfully launched 14 rockets from across Lebanon, with some guidance from the Lebanese Army.

His journey to reach space began as a kid, when he read Jules Verne's novel "From the Earth to the Moon."

"In high school, I used to carve rockets flying from the earth to the moon all over my desk," said Manougian, now a professor of mathematics at the University of South Florida. "I fell in love with the book and I kept dreaming about flying to the moon."

After receiving a bachelor's degree from the University of Texas, Manougian was offered a teaching position at Haigazian.

Manougian recalled his conversation with the university's president when he first told him of his intention to conduct science experiments by building rockets.

"Surprised, he asked me, ‘you want to build rockets in Lebanon?'" Manougian recalled. "At the time we didn't impress the university's president ... he didn't realize we were going to be successful; he thought we were only going to build some toys. In reality, in the beginning they were only toys."

At first the students used pocket money to buy metal tubes for supplies.

"We had no money to buy anything big and sophisticated. For rocket propellant, students had to prepare the chemical mixtures [themselves]."

After the Lebanese Army became involved in the effort the rockets grew in size, and public funds started to flow Manougian's way.

"On the order of President Chehab, the Education Ministry gave us LL25,000 [around $3,500] to finance our yearly costs, and an additional donation came from MP Emile Boustany."

"I was impressed with what we were doing as a group, aside from the excitement of launching rockets higher and higher. The rockets were very impressive and they became somewhat competitive with what some major powers were doing in the world."

International interest in the project grew, not only from the media but also from foreign intelligence bodies.

"The world was interested ... not only in our scientific experiments. They were interested to know why this tiny little country was launching rockets."

The rockets Manougian and his students built were given names such as Arz 1 (Cedar 1), Arz 2 and Arz 3 and on the 19th anniversary of Lebanon's independence in 1962, a test rocket went as high as 402 kilometers above the earth's surface.

Manougian, who calls himself a man of peace, said it would be naïve to think the Army never thought about militarizing his project.

"Every scientific experiment can be used for peaceful purposes or for violence. My students and I had no experience of turning the rockets into weapons," he said.

Looking back on his experience, Manougian said he hoped all of his native country's students and teachers would come to know of, and be inspired by, the advances made in the 1960s.

And the 77-year-old professor believes the Lebanese still have the potential to become involved in cutting edge experiments.

"There are challenges, but nothing is created if the challenge is not there," he said. "The young generation should be encouraged to do something with science. It doesn't have to be rocketry; it can be anything, as long as they pick up some aspect of the sciences."

Manougian believes students should be given the stimulus to engage in scientific experimentation, perhaps to produce something unique to the region.

"Lebanon needs dreamers who will dream big, and widen their imaginations," he said.