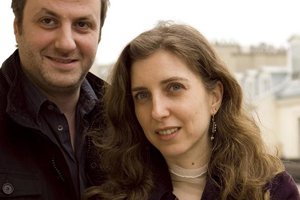 1. How did you first find out about the Lebanese Rocket Society?

Joana: Back in 2001, my sister Tania was doing some research and she mentioned it to us. It was the sort of story we heard and it kind of stuck with us.

Khalil: We also saw pictures in a book by the Arab Image Foundation, edited by Akram Zaatari. And that really intrigued us.

2. What are the advantages of working as co-directors and co-writers?

Khalil: We've been working together for a very long time, and this is really a life project for us. We didn't go to film school or anything. We met, and we started creating things together.

Joana: It's stimulating andmotivating. We are interested about the same things, and we share a common passion. We get excited about these things together.

Joana: Well obviously we fight all the time, and sometimes I wonder why I'm not doing this alone so I would be free to make my own decisions, but it's actually part of us stimulating each other.

4. What is the difference between making a documentary and a feature film, since you've done both?

Joana: We don't really make traditional films, because we aren't traditional filmmakers. Most of our fiction films have some documentary elements incorporated in them. But with documentary comes immense responsibility. The people who you are showing are real, and they continue to live out there in the world. So whatever they say must stay true to them.

Khalil: When you make a fiction film, you start by writing the script, and then you shoot it. When you work on a documentary, you shoot and then you re-write it all in the editing room. We spent more than 5 months editing Lebanese Rocket Society.

5. What is your best memory of this experience?

Joana: When we first walked into Manoug's house in Tampa, Florida. We immediately saw all the pictures, the films, all the documents we had been looking for, for years. And here they were. It changed everything. [Manoug Manougian is the professor who was leading the research with his students at Haigazian University].

Khalil: For me, it was when we brought the reproduction of the Rocket to Haigazian University. It was very difficult to have it done, a lot more stressful than it appears in the film, and so I was very relieved when we finally got it there.

6. What is your message to your audience?

Joana: The film is a tribute to dreamers.

7. Are you working on a new project?

Joana: This time it's fiction, and in a more traditional sense. Right now we're in the writing phase. And the story is linked to Lebanon - we're never very far from Lebanon in our films.

8. Do you find it difficult to get funding as Lebanese directors?

Khalil: It's difficult everywhere. And of course there was a time when no one wanted to fund Lebanese directors.

Joana: We've made films with very little money, and we always managed. What matters to us is that we are able to do what we want, and not be bound by someone else's decisions on our own films. We want to be free in our choices.

9. Why did you choose to include yourselves in the documentary, especially with the voice-over?

Khalil: Because we wanted to continuously question the past from the perspective of our own present. This film ended up becoming something very personal, and the voice-over allowed us to re-transcribe our questions and thoughts as they came to us. The film is also about dreams and our ability to still dream today.

Joana: It was important to make it clear from the beginning that we were born in 1969 and we were taking a deeply subjective approach to our historical investigation. Of course there are the facts as they happened, but another essential aspect was the echo those facts provoked within our own imaginations.

10. You decided to reconstruct the rocket and had it drive through Beirut. Why?

Khalil: It was important for us that the rocket is recognized for what it actually is: a scientific project. And in the artistic space, it can be understood for what it is also, an artistic intervention. It was provocative but also vital to show that.