Lebanon's proud space-race history brought back to life in film 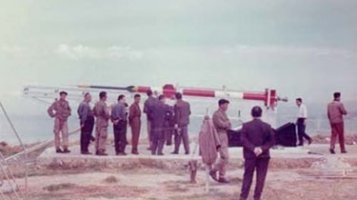 Transporting a large rocket through the streets of Beirut is, perhaps understandably, an idea that might not sit well with local authorities. "It took us nine months of negotiations," explains the Lebanese artist and filmmaker Khalil Joreige at the Doha Tribeca Film Festival.

The rocket was, thankfully, nothing militaristic, but a hollow replica of the Cedar 4, which became the symbol of Lebanon's brief involvement in the space race during the 1960s. And its modern-day journey through Beirut was a reenactment for the final scenes of The Lebanese Rocket Society, co-directed by Joreige and Joana Hadjithomas, which picked up the Best Documentary award in the festival's Arab Film Competition.

Between 1960 and 1966, seven rockets were launched by the professor Manoug Manougian and his students from Beirut's Haigazian College. The Cedar 4, capable of reaching 200 kilometers - a distance that sparked concern from Lebanon's neighbors at the time - was a source of huge national pride. But 50 years later, following civil wars and regional upheaval, this momentous period of scientific achievement has been all but forgotten.

"We started looking through old papers and discovered that it was a really important stage in history," says Hadjithomas, adding that their interest had first been sparked by a postage stamp featuring the Cedar 4. "We started asking, but nobody could remember. We were astonished."

In The Lebanese Rocket Society, a film that helps underline the growth and scale of regional documentary-making in recent years, the two travelled the world, speaking to those who were involved in the original launches.

"It was the idea of communicating a dream," says Hadjithomas. "Lebanon launched the first rocket in the Arab world. We wanted to share this and show that we should be proud of what we have accomplished. But also that we should accomplish something today."