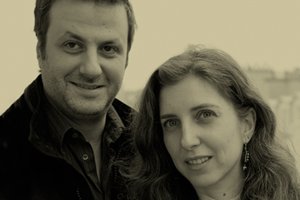 Beirut-based artist-filmmakers Joana Hadjithomas and Khalil Joreige, due in town for the Doha Tribeca Film Festival, speak about their documentary ‘The Lebanese Rocket Society'. The film, an exploration of Lebanon's little known space programme, will screen on 18, 21 and 24 November.

DFI: What's the idea behind your film?
Joanna: Twelve years ago, my sister told me about a Lebanese rocket that was launched from Lebanon and almost landed in Cyprus. It was not a military project but rather scientific.

It triggered Khalil's curiosity and mine, but no one was able to tell us more about the project. A while after, we found the picture of an old postage stamp published in a recent book. It clearly showed the picture of a rocket that had the drawing of the Lebanese flag on it, so we started the research.

Khalil: We looked for ages without finding relevant documents. With the help of some people, specifically Manoug Manougian, the founder of the Lebanese Rocket Society, we were able to find all the necessary documents, photos and footage. After looking at these materials, a big question imposed itself: Why did everyone forget about this event when it had headlined newspapers in the past, and was even shot on camera?

DFI: When did you decide to convert your research into a film?

Joanna: We were excited that the project had started in a small newly found Armenian university, specifically with a maths teach who worked with his students on realising the dream of launching the first rocket in the Arab world, and they nailed it! We were also moved by the fact that this great event was completely forgotten and we had to ask - why?

DFI: What challenged you?

Khalil: When we first started we did not have a lot of material, and suddenly we became aware of the places and dates we should look for when the whole story became clear to us. As artists we know how to use the archive to build up an image.

This film is divided into four major parts. The first one is about the search we have conducted at present time, the second follows the past and the story of the rocket, the third is about restructuring the image of the past and building an artistic rocket with Sharjah Biennale, which toured throughout the city. The fourth part is animated with Ghassan Helwani, because it's about the future and how we imagine Lebanon would have looked like in 2025 if the space rocket project had not been withheld.

DFI: How did Manoug react when you spoke to him about the project?

Joanna: We were able to find Manoug Manougian's website, so we emailed him. The first time we spoke, he was reluctant and not very responsive. He kept asking why we wanted to make a film about the project. We went all the way to Los Angeles where there was a Haygazian University Alumni reunion. There, we were able to find everyone that we interviewed in the film, from the university founder to Manoug, some of the previous students who took part in the rocket project and the university's current president.

We didn't have any funding for the film, but our producers agreed to send us there. We met Manoug but he hid the fact that he owned a massive archive. We decided to acquire the necessary funding and meet him again. We went back to Tampa to see him at university. When we started shooting he suddenly opened the door to an office full of pictures, footage and documents about the rocket. He wanted to give us the entire archive but we couldn't accept the generous offer, so we spent the whole night making copies.

Khalil: At the beginning, Manoug was afraid that his project would be misinterpreted, so he asked us to emphasise that the project was purely scientific. As he said when he introduced the film at Toronto International Film Festival, he was afraid that after 9/11 all these intelligence agencies such as CIA and FBI were back to monitor him. According to him, he was monitored in the past for being a Lebanese able to make a rocket that had a range of 600 km in the 1960s.

DFI: Does the film intentionally reflect current politics in the region?

Khalil: When we were shooting the film, people started to dream again of change and the future. It was the Arab Spring, so we decided to further focus on those dreamers.

Joanna: This film is for the dreamers, because not many people in our region dream of the future anymore. We wanted to ask questions: How do we dream today? Have our dreams become less ambitious?

DFI: This is not the first time you've worked together. How would you describe your relationship?

Joanna: It's hard to say how we split the work between us. I can't really say who comes out with the idea, who writes it and how the idea is developed or who shoots. We don't work like that, it's more like a life project. Usually we are not convinced by each other's idea, and when one starts to develop it, the other might start liking it and jumps onboard.

Khalil: The most important thing is that we don't make sacrifices to each other. If her idea doesn't convince me, I don't get involved just to please her.