Home News Documenting a world of many truths

Documenting a world of many truths 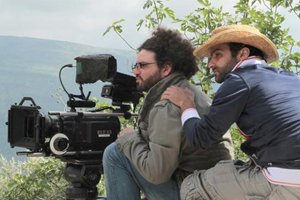 BEIRUT: Documentary is pervasive in Lebanon. Fledgling filmmakers the world over cut their teeth on documentary before moving on to feature-length fictions. In Lebanon, though, younger filmmakers are as likely to experiment with documentary as to "graduate" to fiction.
Experimentation with documentary has made it a more elastic form than the conventional in-depth reportage that remains a mainstay of television news magazines.
One of the premises of "creative documentary," as it's been termed, is that lived reality is a less straightforward, inconveniently multifaceted, thing. Depicting it requires more nuance, an approach embracing some of the formal techniques of fiction film.
A partisan of creative documentary, Simon El Habre finds ample obstacles to such work in Lebanon.
"The first challenge," he says, is "convincing people to fund such documentary, while their minds are formatted to something related to the news.
"The second challenge is when you're interviewing people. Since they live in this country and watch the news they are also formatted to think and talk in a certain way - that is directly into politics ... In the interviews, they always start with all these clichés like ‘Where's the state?' It's a challenge to ... take them someplace else - to more personal, more human stories.
"Finally there's the audience."
"One Man Village," Habre's 2008 feature directorial debut, depicts the life of his uncle Semaan, who abandoned urban life and returned to the Chouf village of Ain al-Halazoun. He is the sole human inhabitant of his family's village, living among the dairy cows which provide the basis of his livelihood.
Ain al-Halazoun was abandoned because of sectarian conflict - one of many population movements that characterized the 1975-1990 Civil War.
Yet Habre's camera averts its gaze from that sordid history, focusing upon the silent dereliction of the village and the bemused quiet of Samaan's daily routine. When he inquires why the village is virtually empty, it underlines the loose fit between the (largely undocumented) history of what transpired and the former residents' slippery depictions of events.
After its world premiere, "One Man Village" raked in a bouquet of accolades and was picked up by an array of international film festivals, where it often took prizes - like the prize for best international film at Hot Docs, The Canadian International Documentary Festival.
"Gate #5," Habre's second feature, is presently screening as part of Scrapbook, Metropolis' eight-film program of recent, and lauded, Lebanese films. The film takes Habre's experiments a step further.
One geographic center of the film is Beirut Port. During the Civil War, Gate #5 was said to be the Port's most modern facility, where much of the goods coming into the country were transhipped, and which, it so happens, was controlled by the Lebanese Forces.
Habre's way into this part of Beirut Port is the anecdotes and reminiscences of a handful of crusty and ageing truckers who work there to this day. The film's second center lies in the person of Habre's father Najm. The elder Habre at one point owned several commercial haulers, but today works as a taxi driver.
The film interweaves the truckers' prewar and wartime tales of Beirut with Najm Habre's recollections of how at a young age he left the family village for Beirut and was compelled to go home before returning to the city. Again, Habre resists telling his story in conventional documentary terms.
"Because it's called Gate#5, which is especially related to the war, people want the film to have more war stories ... When you're treating a subject like this, especially in a country like this, people want to see an extension of the news in it. That's not my aim.
"I had the same feedback about ‘One Man Village.' People wanted to know why I didn't talk more about the Mountain War, how people were displaced and killed, all these details. They see documentary in these terms: You have to tell the truth. But no one really knows the truth."
Naturally "Gate #5" bears many of Habre's fingerprints, yet it's a completely different film from "One Man Village." Where the first film is taciturn, like its protagonist, the second work is as gregarious as the ageing truckers that are its principal informants.
The ample silences of "Village" gave its visual language the quality of still lifes - with the camera contemplating the details of the town's dereliction and the magnificent vistas of the mountain setting. "Gate" demands a language of movement, which is averse to the poetry of the still life.
"I'm ... seeking a certain cinematic language," he says, "one I won't necessary fix - otherwise it would be boring ... Every time I do a film I try to find a new way of expression ... I hope I can continue this search."
Habre comes to direction from film editing - something he's been doing professionally for 12 years or so, and to which he intends to devote a couple of years before his next directorial project. Yet he hesitates to censor his informants in the editing room.
"In ‘Gate#5' I was always looking for personal and human stories," he says. "Now if during the interview someone [says something that does fit my choices], I keep it. I don't have the right to alter peoples' speech."
Habre prefers to nudge his informants toward personal recollection during the interview. "I keep the character talking about whatever he wants to talk about, then I start digging. Most of the time the first part of the interview is always thrown away, then we start working on the second part."
That said, his work as an editor probably has influenced the way he directs.
"While editing a lot of projects, I was often confronted with ... as much as 120 hours of rushes. So when I started working on ‘One Man Village' five years ago, I'd learned what not to do."
"I think because during the editing, especially for documentaries, you work a lot on the film's structure ... I have a very clear and solid structure in my head [before I start shooting]. It's essential."