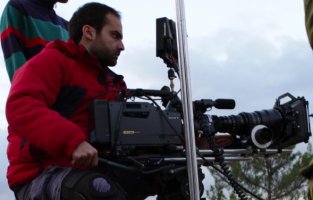 While the red carpets and "We Love Tom" placards may make most of the headlines, behind the scenes at the Dubai International Film Festival over the past few days a huge industry machine has been whirring to help push regional filmmaking.

Among the numerous workshops and programmes are efforts to link directors with producers, award funding for projects and generally to ensure that future festivals include increasing amounts of quality Arab-made productions in their scheduling. The festival, now into its eighth year, has been able to see the fruits of its labours and this year has welcomed back filmmakers who have taken advantage of its growing industry programme.

Among the returning festival beneficiaries is Simon El Habre, a Lebanese director whose second documentary Gate #5 received its world premiere on Friday. In 2007, he came to Dubai with an incomplete project about his uncle, the only remaining inhabitant in the tiny hamlet of Ain El Hazaroun, which had been all but destroyed during the civil war. "I won funding from the Dubai Film Connection that was exactly the amount we needed to finish the film," says El Habre. "My story with the Dubai Film Festival pretty much started there."

With financing in place, this unfinished project became One Man Village, which had its international premiere the next year in Dubai. Picking up the Special Jury Award, the film went on to screen at more than 30 festivals across the world. At the Canadian documentary festival Hot Docs, it picked up the best international documentary feature award in 2009 and also showed at the Berlinale the same year.

"The international exposure of the film started here," says El Habre. "It was actually because of Dubai that it went to Berlin." Although El Habre had supplied his film to the Berlinale, the DVD was corrupt. Fortunately, one of the Berlinale programmers was in Dubai and, having seen the film here, was able to get the film included in the selection.

And now, two years on, El Habre is back in Dubai presenting his second documentary, Gate #5. The film follows the story of a group of four Lebanese lorry drivers at the port of Beirut from the 1960s to the present day. "It's a portrait of them and through their stories I'm trying to reconstruct certain memories of the city and how changes came to the port and the city in parallel."

Like One Man Village, El Habre received some financing from Dubai for Gate #5, picking up help for post-production with the festival's Enjaaz fund, which awards up to US$100,000 (Dh367,220) for fiction features and documentaries. While picking up such funding and attracting the interest of potential investors is reliant on a project's quality, El Habre does believe that having made a previously acclaimed film does have definite advantages. "It helps a lot, perhaps not in terms of money, but getting attentions and people's reaction," he claims. "Although you cannot rely on the success of one film, with One Man Village I got the impression that people weren't reading the project properly because I was nobody. Now I know that people will read it seriously." El Habri's story is just one of many in Dubai this year.

While it's obviously the filmmakers themselves who are the creative forces, events such as the Dubai festival have slowly built up a platform of opportunities that can help get their ideas made and then get them noticed. After all, not everybody is Tom Cruise.