Is documentary the ''new news''? 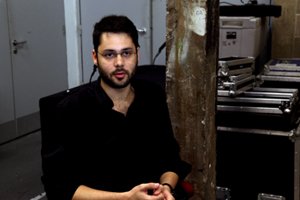 "(In the film) we took an area called Karantina, which is the ghetto on the outskirts of Beirut, and we use the history of this area as a metaphor for the violent disturbing history of Lebanon," Mishlawi said in an interview with TrustMedia.

A painter and a musician by education, Mishlawi evoked the masters cinema who sealed his commitment to filmmaking.

"The director who brings me to tears has always being Stanley Kubrick. He was the reason I wanted to film and I honestly believe that cinema changed after he started making films."

Another major influence on the young Lebanese director was German director Werner Herzog and the German New Wave movement.

"Lessons of darkness inspired me to make films," Mishlawi said. "When I saw the marriage of images and music, I was just amazed. I never knew documentaries could be like that because I had only seen them on TV."

In the first of a two-part video conversation, Mishlawi talks about the role of documentary filmmaking in opposition to investigative journalism, and video activism. Sector Zero - Part 1

In the second part, he discusses the term ‘Arab World', the danger of stereotype-building when filming in the Middle East, and why Lebanon could join in the conversation on the Arab uprising. Sector Zero - Part 2

Mishlawi is the example of a new generation of filmmakers who are questioning content and form in storytelling.

"My specialization in my BA in Fine Art was photographic manipulation, and mixed media and painting. I always had a fascination with how you can play with photographs and the photographic image," he recalled.

"I think that comes with my idea of wanting to play with reality. How far can you go between fiction and non-fiction, where is the line between what's really happening and your fantasy? And my film is pretty much on that level... Is this really Karantina or have I fabricated the whole thing?"