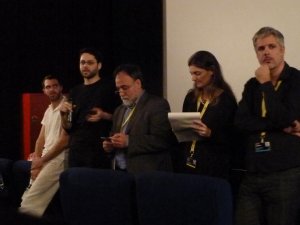 In presence of director Nadim Mishlawi and producer Georges Schoucair, the premiere of the documentary Sector Zero took place at the 8th edition of the Dubai International Film Festival.

Through a closed study of the notorious, now derelict district of Karantina, Sector Zero uses Karantina's history as a metaphor for Lebanon's own troubled past, suggesting that by denying their traumas, the Lebanese people have entered a downward spiral into the abyss that is their own collective unconscious. The film is not so much a documentation as it is an exploration into the dark corners of modern Lebanon's collective memory in an attempt to discover how much of who we are is based largely on that part of ourselves we have chosen to forget.

Sector Zero will be released in 2012.