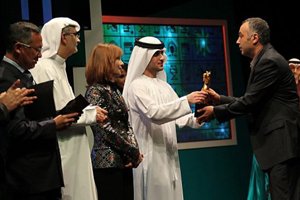 The film, set shortly after the start of Lebanon's 1975-1990 civil war, tells the story of a young woman who is torn between a fiance picked by her family and a former lover who suddenly reappears in her life.

Hachem received the gold Muhr award from French actress Isabelle Huppert, who was in Dubai to present her own film, "Copacabana."

The film tells the story of a woman who returns to Jordan after a divorce in the United States and tries to pick up her former life, but finds it impossible to reintegrate into a changed society.

Director Nayla al-Khaja won first prize in the Emirati film category with "Bored," an uncompromising portrait of relationships in an arranged marriage.

A total of 157 films from 57 countries were screened at the festival this year, in its seventh edition.