The 14th Meetings on the Bridge hands out its awards 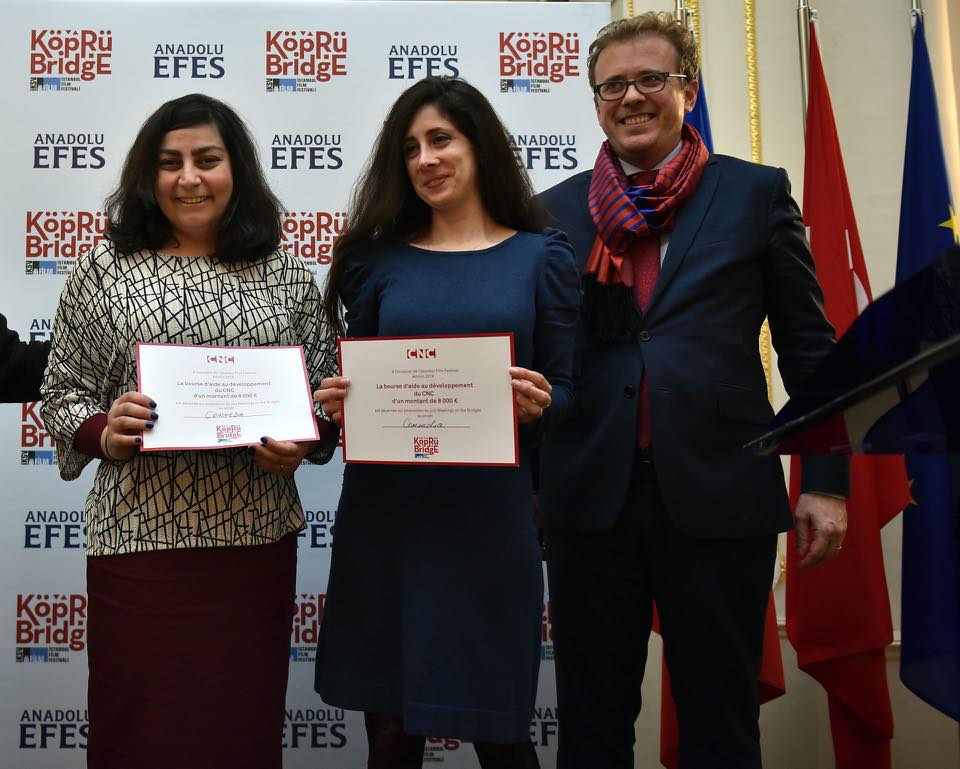 The 14th edition of Meetings on the Bridge has drawn to a close with its awards ceremony, held on 12 April at a reception hosted by French Palais, and introduced by Istanbul Film Festival director Kerem Ayan, head of Meetings on the Bridge Gülin Üstün and French regional audiovisual attaché Christophe Pécot. The winners of the international co-production and networking platform of the 38th Istanbul Film Festival were chosen from among 20 film projects in development and eight in post-production, hailing from Turkey and its neighbouring countries (see the news). Over 350 meetings were organised with 130 professionals.

The main prize, the Meetings on the Bridge Award, valued at 30,000 Turkish lira (€4,600), was bestowed upon the project Electric Sleep, directed by Zeynep Dadak and produced by Zeynep Ekmekçi and Pınar Bağcı, who also picked the MFI Award. The other main prize, the CNC Award, which comes with €8,000, was presented to the Lebanese project Commedia, directed by Myriam El Hajj and produced by Myriam Sassine, of Abbout Productions.

As for the remaining, mainly technical, awards, the documentary Selda, directed by Amber İşbilen and produced by Leyla Hamedi, received the Melodika Sound Award; The Funeral by Orçun Behram, produced by Müge Özen, won the GeniusPark Special Effects Award; while the Dell Precision Award, which was handed out for the first time, went to The Soloist by Banu Sıvacı, produced by Zeynep Koray. The other newly introduced trophy, the Seyap Award, was given to the documentary project Güneş by Nejla Demirci, produced by Mesut Ulutaş. The Postbıyık Sound Production Award, which is reserved exclusively for a Neighbours project, was handed to Egyptian director Mohamed Siam for Blood and Honey, co-produced by the director and Guillaume de Seille, of Arizona Productions. Finally, I Will Survive by Ali Ercivan, produced by Engin Palabıyık, will be invited to the upcoming Transilvania Pitch Stop, which will take place during the 18th Transilvania International Film Festival (31 May-9 June).

In the Work in Progress workshop, the jury members, Giorgo Gosetti (Giornate degli Autori), Agatha Valentin (Totem Films) and Ineke Kanters (The Film Kitchen), were tasked with selecting the victors from among five participants. Pelin Esmer’s documentary Queen Lear, which is being produced by Dilde Mahalli, swept all the major awards, winning three of them: the 30,000 Turkish lira (€4,600) Anadolu Efes Award, the Daire Creative Key Art Design Award and the Paz Digital Communication Award.

The Color Up Award, which covers the expenses of online editing and colour grading, went to another documentary, Miss Holocaust Survivor by Eytan İpeker, produced by Yoel Meranda together with Israel’s Eitan Mansuri and Denmark’s Katrin Pors. Finally, the Başka Sinema Award was presented to Nesimi Yetik for his drama It’s All About Peace and Harmony, produced by Betül Esener.

Here is the full list of winners at the 14th Meetings on the Bridge: