Home News One Of These Days at Final Cut Venice

One Of These Days at Final Cut Venice 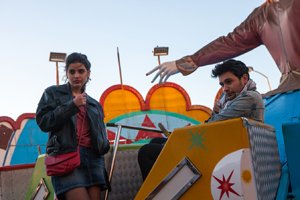 One Of These Days by Nadim Tabet will be presented in Final Cut Venice, the workshop dedicated to African and Middle Eastern films in post-production at Venice Film Festival - La Biennale di Venezia.

The fourth edition of the FINAL CUT IN VENICE workshop will take place from September 3 to September 5, 2016 during the Venice Production Bridge of the 73rd Venice International Film Festival (Lido di Venezia, 31st August – 10th September 2016).

The Festival’s purpose is to provide concrete assistance in the completion of films from Africa and from Iraq, Jordan, Lebanon, Palestine and Syria; and to offer producers and directors an opportunity to present films still in the production phase to international film professionals and distributors in order to facilitate post-production and promote co-production partnerships and market access.

Beirut, on an autumn day. The city is on the edge of chaos, but for Maya, Tarek, Yasmina and Rami, aged between 17 and 22 years old, it is just an ordinary day during which they question themselves about sex, love and night time hanging out.