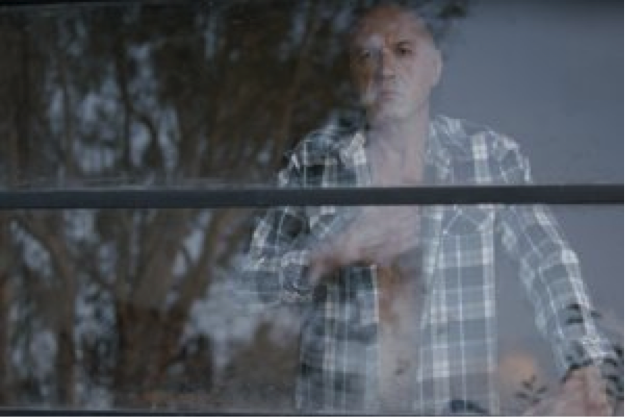 A mysterious man apparently suffering from memory loss is reluctantly taken in by a group of people who'd rather remain under the radar in The Valley (Al-Wadi), the latest film from Lebanese avant-garde director Ghassan Salhab (Phantom Beirut, The Mountain). Again a mostly internalized drama about the complex and unstable state of Salhab's Levantine homeland, this beautifully designed production premiered in Toronto and can look forward to a healthy fest life, though its thoughtful pacing and 135-minute runtime will even further limit its already slim prospects as a theatrical item.

An unnamed stranger (Carlos Chahine, from Salhab's Terra Incognita and The Last Man), with gray stubble and a bloodied shirt, is seen hobbling along a deserted mountain road in the Bekaa Valley, until he runs into a small group of people with car trouble. He manages to get their vehicle started again but is unable to answer any of their questions about who he is, where he's from or what has happened to him.

The kind but reserved stranger, who seems to be in his fifties and suffering from amnesia apparently from a car crash heard -- but not seen -- at the start of the film, is finally taken in by the group, who feel sorry for the helpless and injured man but who also seem strangely reluctant to take him back home with them. As they pass the armed-to-the-teeth guards at the gate of their farm in the titular vale, things become clearer, at least for viewers aware of the fact the Bekaa Valley is not only Lebanon's main source for agricultural produce but also a major producer of cannabis and opium poppies (needed to produce heroin). A visit to and subsequent work at an on-site chemical laboratory by the farm owners further confirms this theory.  The amnesiac man seems like a logical entry point into this unknown world, since, like him, most viewers will have never been to such a place and they don't really know what they're looking for or what the precise purpose of their visit even is -- they just happen to find themselves there. But that's just half the equation, as Salhab, who also wrote the screenplay, is also banking on the fact that audiences, likely brought up on genre films as much as arthouse fare, will grow suspicious of the stranger too, especially after he tries to escape through a window at night, which will make viewers question not only the men and women who run the farm but also the outsider in their midst.

Indeed, a generalized sense of anxiety, suspicion and uncertainty seems to touch all the characters, the film reflecting how the people of Lebanon seem to be feeling right now: unsure or even doubtful of everyone around them even as it becomes clear that no citizen is entirely evil, as the drugs producers still had enough heart to take in a man in need of help.

The third part of this equation, the government and police forces that are nominally responsible for the safety of all citizens, are conspicuous only by their absence. After two relatively subdued first segments, in which violence is more of an unspoken if near-constant threat than a reality, in the film's third and last part, full-scale war breaks out and all the characters are forced out of the house as nearby villages are bombed from the air. "Beirut has been erased" a voice on the radio announces and it's clear that the apocalyptic happenings -- shrewdly suggested through a mixture of modest but very impressive special effects, good use of extras and a booming soundscape -- are a visualization of the worst fear of all citizens in the extremely volatile region (Lebanon shares borders with both Israel and Syria).

Despite all the noise, smoke and violence, Salhab avoids a moralizing ending, suggesting only that his ambiguous characters all have to deal with outside circumstances the best they can, which feels more life-like but also makes the film even less accessible to mainstream audiences used to a clearly legible resolution.

Production designer Hussein Baydoun's farmhouse, where almost all of the action is set, is a modern space made of grey concrete and glass that's dominated by rectangular shapes, with cinematographer Bassem Fayad most often shooting in ways that highlight how the characters are boxed in by their surroundings - even as openings such as windows or doorways suggest an outside world that might not be directly apparent or seen in its entirety.